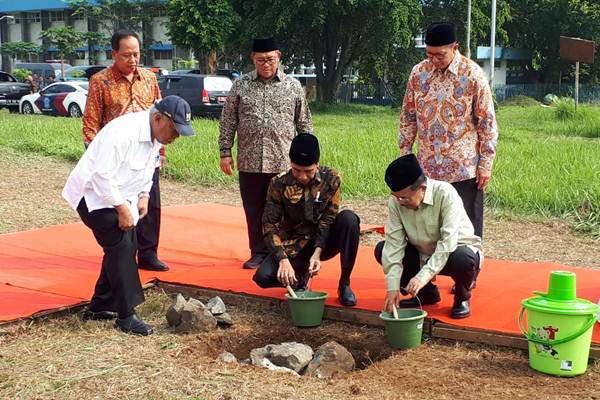 Bisnis.com, JAKARTA - The Ministry of Religion has taken legal action by reporting Abdul Manan cs for allegedly taking over the campus of the Indonesian International Islamic University (UIII) in Depok, West Java. According to the official website of the Ministry of Religion on Tuesday (12/5/2020) morning, the report numbered LP / 1113 / K / V / 2020 / PMJ / Restro Depok was carried out on the power of the Chairperson of the UIII Task Force to the UIII Development Task Force Advocacy Team, Ibnu Anwarudin, at the Police. Metro Depok on May 11, 2020.

This report is the impact of the campus construction on an area of 142 ha in Cisalak, Depok. The land of the former Radio Republik Indonesia (RRI) which is planned to be used for the construction of the UIII campus under the auspices of the Ministry of Religion. According to Ibnu, the people reported were Abdul Manan, Alexandria Bangun, Arifin Silalahi, and Amirudin, who acted on behalf of themselves as administrators of the Verpoonding All Indonesia Land Settlement Consultative Body (BMPTVSI).

They are reported on suspicion of violating Article 167 in conjunction with Article 385 of the Criminal Code, namely intentionally and without the right to enter land owned by other people and / or occupy land without the legal owner's permission, with the threat of a maximum sentence of 4 years in prison.

Since the beginning, the Ministry of Religion has communicated persuasively, residents who are aware that they occupy state land have moved voluntarily and have been given compensation according to the regulations. However, there are still residents who do not want to receive compensation and demand greater compensation, even the market price for the 35 hectares of land they claim. "They continue to try to disturb and intimidate project workers," said Ibnu.

The excuse that they did not want to leave the location, said Ibnu, was because they were still appealing the Bandung PTUN decision in which they had already lost. "They think they have the right to live there. In fact, the issue of who is the legal owner of the land is actually over and has legal force since the Bandung High Court decision in 2012, said Ibnu.

The reason for Abdul Manan cs to continue to harass the land was considered by Ibnu to be baseless. In the trial at the Bandung Administrative Court they could not show proof of ownership, so their lawsuit was not accepted. In fact, the UIII campus land is legally owned by the Ministry of Religion based on the right of use certificate number 00002 / Cisalak / 2018. Ibnu emphasized that if there are other parties who insist on imposing their will by means of against the law, the UIII Development Task Force does not hesitate to carry out the legal process.

He underlined that the construction of the UIII campus was a national strategic project (PSN) whose implementation should not be hampered by anyone. "Currently only the actors have been reported, it is possible that if there are other parties involved they will also be processed by investigators. Moreover, they continue to insist against the law," added Ibnu.

Previously, the West Java Provincial Government said it would take a number of curbing steps related to land acquisition which was an obstacle to the development of UIII in Depok. In August 2019, Plh. West Java Provincial Secretary Daud Achmad explained that most of the land to be built on the UIII campus belongs to Radio Republik Indonesia (RRI), but much of it is occupied by community land. "Occupied by the community, some are gardening, some are planting," said Daud at the time.

Daud said that his party had taken steps to acquire land in accordance with the applicable regulations, namely providing compensation to the affected community even though it did not run optimally because it still received rejection from the community.

Previously in November 2019, based on information circulating in cyberspace, the Chairman of BMPTVSI, Abdul Manan as a representative of the residents of Kampung Bulak, Cisalak, conveyed three demands to the Depok City DPRD regarding the construction of UIII. First, they asked for a temporary halt to control activities until an agreement was reached between the residents and the government.