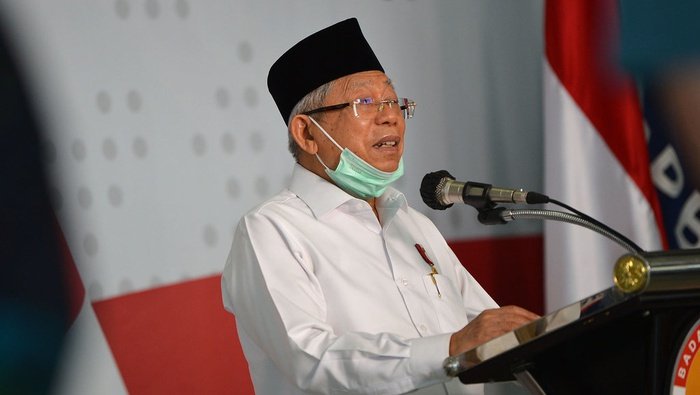 Vice President Ma'ruf Amin asked The Minister of Finance Sri Mulyani to prepare a budget for the acquisition of 60 hectares of land for the construction of uiii campus. tirto.id - Vice President Ma'ruf Amin asked Finance Minister Sri Mulyani Indrawati and Minister of Religious Affairs Fachrul Razi to immediately prepare a budget for the release of 60 hectares of land, which is part of the plan to build the campus of the International Islamic University of Indonesia (UIII) in Depok, West Java.

"The Direction of the Vice President, Ministry of Finance and Ministry of Finance is requested to immediately prepare a budget for land acquisition in 2020 covering an area of 30 hectares and a land acquisition budget in 2021 also covering an area of 30 hectares," Ma 'ruf said through an official statement from the Vice President's Secretariat (Setwapres), Wednesday (10/8/2020).

UIII campus stands on an area of 142.5 hectares, 90 hectares of which are inhabited by local residents, so evictions are necessary. The release of the first stage of land covering 30.7 hectares, as many as 65 displaced houses was completed in November 2019. Meanwhile, the second phase of land acquisition of 30 hectares is targeted to be completed before the implementation of the 2020 Regional Head Elections in December. The remaining 30 hectares of land is expected to be released in 2021. In total, for the construction of this campus, there are 366 areas of land that must be cleared.

Moreover, it is owned by Radio Republik Indonesia (RRI). Also read: Donald Trump says he's 'not going to do it' UIII Campus Becomes Jokowi's Ambition to Displace People's Land Then, the chairman of the non-active Indonesian Ulama Council (MUI) also requested the land acquisition to receive full support from the Governor of West Java Ridwan Kamil, The Mayor of Depok Mohamad Idris as well as the Police and Kodim Depok, West Java. "The Ministry of Religion and the UIII Task Force Committee are asked to continue to conduct land acquisition as a whole. The Governor of West Java, Mayor of Depok, Depok Police and Depok Kodim are expected to fully support the activities and security of UIII land acquisition," he said.

In July 2020, the Ministry of Finance said that uiii development was carried out in stages, in the first stage it had reached 70 percent. In addition, Ma'ruf asked UIII Rector Komaruddin Hidayat to immediately complete the composition of the international standard curriculum, especially for four study programs, namely Islamic Studies, Political Science, Law and Islamic Economics. "UIII is an international campus, so the curriculum is also substantive and of international standards," he said. Ma'ruf also requested that the entire schedule of preparatory work be carried out from September or exactly one year before the lecture activities officially opened in September 2021.

Meanwhile, UIII Rector Komaruddin Hidayat said that the campus he will lead is not only prioritized for Muslims, but also inclusive for all academics. "I consciously controlled this project and avoided political controversy. We also want to create a kind of Interfaith Center so that UIII is not exclusive to Muslims only," Komaruddin said after a virtual meeting with Vice President Ma'ruf Amin in Jakarta, Tuesday ( 11/08/2020).

UIII was established in 2016 based on Government Regulation No. 57 of 2016. The STATUTE of UIII was made in 2019 based on PP No. 23 of 2019, along with the appointment of Trustees and the inauguration of uiii rectors. The construction of UIII Campus was an ambitious project of President Jokowi and Vice President Jusuf Kalla during their time in office.

Jokowi symbolically laid the first stone for the construction of the campus on June 5, 2018. Now the first stone has been buried in the ground and piles of earth nails that have not been plugged in. The campus that was proclaimed as the center of Indonesian Islamic civilization left the problem of mass eviction of citizens. On August 22, 2019, Jusuf Kalla said the construction of the campus was still constrained by land acquisition: residents' residences and towers owned by RRI.