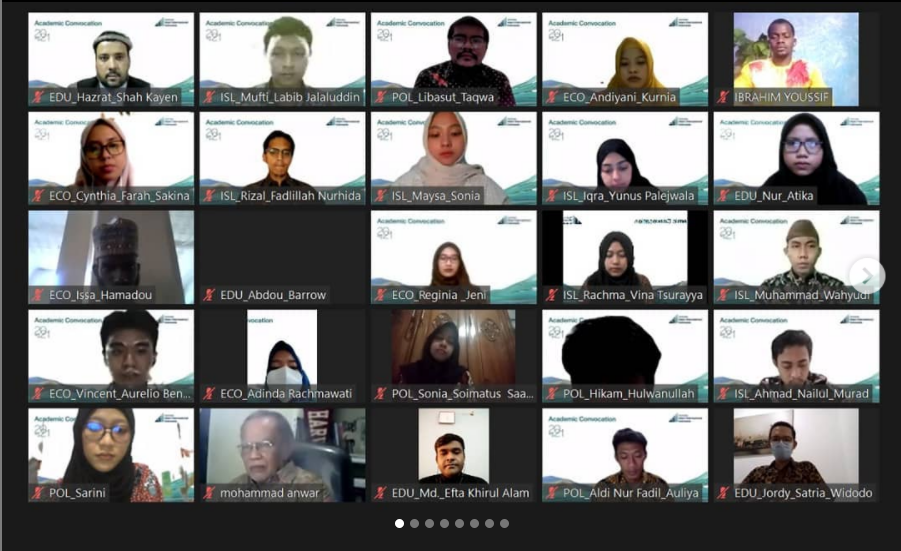 Even though it is still conducted virtually, in general the class goes smoothly. At first, it was feared that the time difference would be an obstacle. It is understood that all new UIII students come from various countries with different time zones. However, with adjustment efforts and understanding from all parties, this issue of time difference can be overcome. In the first days of lectures, the enthusiasm of the students and their happiness to be part of UIII was seen.

When the lecturers introduced Indonesia as a country with a very rich cultural diversity and friendly people, it seemed that they couldn't wait to come to Indonesia soon. Face-to-face lectures are something that is highly anticipated, as expressed by Dr. Phil. Syafiq Hasyim after delivering his first lecture about academic writing skills. “International students are excited to come to Indonesia to study on campus. Hopefully it can be implemented soon,” said Syafiq, a lecturer at UIII who also serves as Director of Library and Culture at UIII.

A week earlier, on September 20th  UIII held an academic opening ceremony called the Academic Convocation which was attended by the entire academic community namely the Rector (Prof. Komaruddin Hidayat), the Chairman of UIII Board of Trustees (Mr. Haji M. Jusuf Kalla), the four Deans from four Faculties at UIII, Heads of Study Programs, Lecturers, staff, and employees. The Minister of Religious Affairs, Mr. Yaqut Cholil Qoumas also attended the event and gave a virtual speech from his office.

The presence of students has complemented the elements of the UIII academic community which — for the last five years have consisted of the elements mentioned above — except the students. So, what does the presence of the students within the civitas academica, which is often called the academic community, mean? First, of course, without students the term civitas academica is likely insignificant, considering they are actually the main component in the academic community. Second, students are the supporting element and at the same time the implementer of the campus vision and mission. No matter how good a vision and mission we have, what is more important is how we carry them out. Third, students are active subjects who are able to produce knowledge and carry out discursive practice, in the sense of spreading knowledge to influence public awareness.

With that position, they help shaping the image of the UIII campus, including its future. By being part of the UIII academic community, students are also responsible for carrying out the ideals of their alma mater. UIII is established to introduce moderation and religious tolerance of Islam embedded in Indonesian society to the international community. The campus, which establishment is fully supported by the President of the Republic of Indonesia, Joko Widodo, is also envisioned to become a leading center of world Islamic civilization.

With its position as the largest democratic Muslim country in the world, Indonesia wishes to contribute and to be able to play that role. And with the situation in the Islamic world that is constantly hit by communal conflicts and civil wars, Indonesia is expected to become an oasis of peace. Islam and other religions in Indonesia, including the myriad local religions and faiths, have coexisted in peace and harmony for hundreds of years in the region.

This does not mean that there have not been minor and temporal upheavals, but they are less significant compared to the moderate and tolerant mainstream of Indonesian Islam. This is because Muslims in Indonesia practice the teachings of what is called Islam rahmatan lil ‘alamin, Islam as a mercy to all human beings, nature and environment without limits. In the context of Indonesia, some of the things mentioned above have become a norm, although some are still in the form of ideals, especially when we talk about the contribution of Islam to world civilization.

Of course, there are separate issues and distinctive reasoning why this large Muslim nation has not been fully able to play an important role in solving global issues. Today's world problems – such as poverty, violence, discrimination, conflict – are often complex, interrelated, and even intertwined.

Therefore, one way to participate in solving it is to build a network. That is one of the reasons why UIII is built as an international campus. Indonesia wants to contribute in building a more just and humanist world civilization. Come to think of it, the history of Islamic civilization that was so great in the past called the Golden Age of Islam can actually be simplified as a blend of a culture of tolerance and a culture of science. Both are supported by an open attitude and freedom of thought.

So, if we want to revive Islamic civilization as it was in the golden age, there is no other way but to start by building a culture of tolerance and knowledge. This confirms the relationship between society (culture) and the world of campus (sciences). So UIII is built with three pillars that strengthen these relationships. First, UIII as an educational institution. Second, UIII as a center of Islamic culture and society. And third, UIII as a research center to analyze strategic Islamic issues and challenges of the Islamic world.

Back to our question: where is the position of students in this effort to realize the ideals of UIII and lift the three pillars that support it? As part of the academic community, students are not an independent entity. Its existence is also not just to complement what has already existed.

The way this epistemic community works is in the knowledge network because it is based on solid research findings and valid results. This means that the epistemic community does not live above the wind, or live in an ivory tower, but produces relevant knowledge to answer and respond to all social problems. They are a working group of academics who have different cultural and scientific backgrounds but at the same time synergize together to solve key issues and important problems.

The epistemic community has the awareness to carry out discursive practices in an effort to increase public awareness of certain issues and influence the policies that will be taken by the policy-makers. By positioning itself as an epistemic community, the campus will become a kind of “policy industry” that acts as a partner of society and the state. (ag)

Chief of Presidential Staff Moeldoko : UIII will be a Research Center for Indonesian Civilization