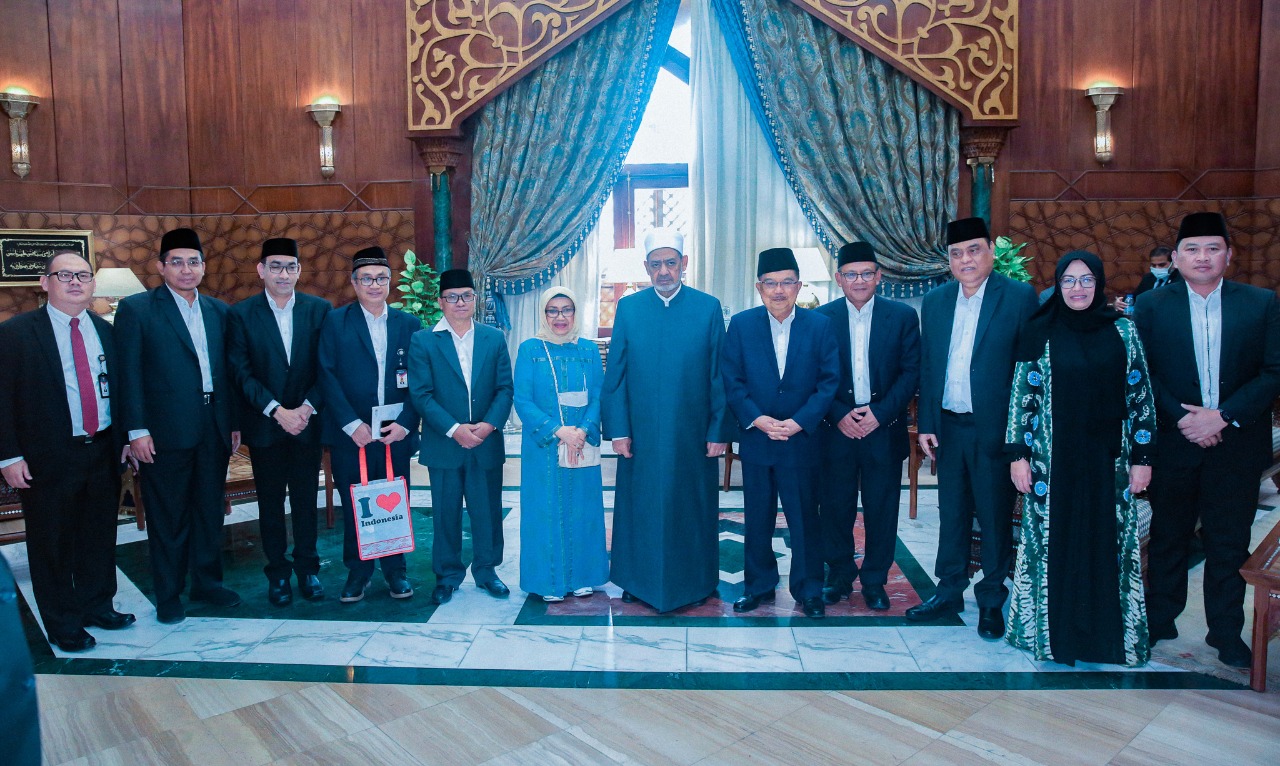 UIII.AC.ID, DEPOK - On 4-10 October 2022, Jusuf Kalla, UIII Head of Board Trustees alongside with Prof. Dr. Komaruddin Hidayat, The Rector of UIII and Prof. Jamhari Makruf, UIII Vice-Rector for Research, Cooperation, and Community Engagement visited Al- Azhar University in Egypt, World Muslim League and an education assembly in Saudi Arabia. The purpose of the visit is to discuss future collaboration projects with the two countries.

This visit included four missions: a visit to Al-Azhar University for cooperation purposes, UIII socialization with Egyptian students, a collaboration meeting with the World Muslim League, and a comparative study in Saudi Arabia education institutions.

At the meeting, UIII presented a draft Memorandum of Understanding (MoU) between Al-Azhar and UIII. It has been approved, and the Egyptian Minister of Education has been asked to ratify it. As part of the collaboration, an Al-Azhar professor will teach at UIII. To start the program, three Al-Azhar professors with special expertise in Usul Fiqh, Hadith, and Tafsir are expected to begin teaching at UIII in February 2023. Jusuf Kalla and Prof. Komaruddin Hidayat introduced UIII to 150 Indonesian students in Egypt on October 5th to highlight UIII as a new emerging graduate university in Indonesia.

Meanwhile, in Saudi Arabia, Prof. Dr. Nashir Az-Zahrani, the founder and chairperson of the Assalamualaika Ayyuhan Nabi Foundation as well as the founder of the "Museum Rasulullah," which is funded by Rabhitah 'Alam Islami, met with representatives from UIII. The "Museum Rasulullah" in Jakarta is something that Rabithah strongly supports; alternatively, the museum might be located at UIII, where there is also a master plan for doing so.

UIII representative had a meeting with Shaykh Muhammad Malik bin Alwi Al Maliki. Shaykh Muhammad Malik donated his father's books to UIII library. For a long time, the Shaykh Maliki Madrasah has been home to several prominent ulamas from Indonesia learning Islam in the holy city of Mecca. (ANJ)