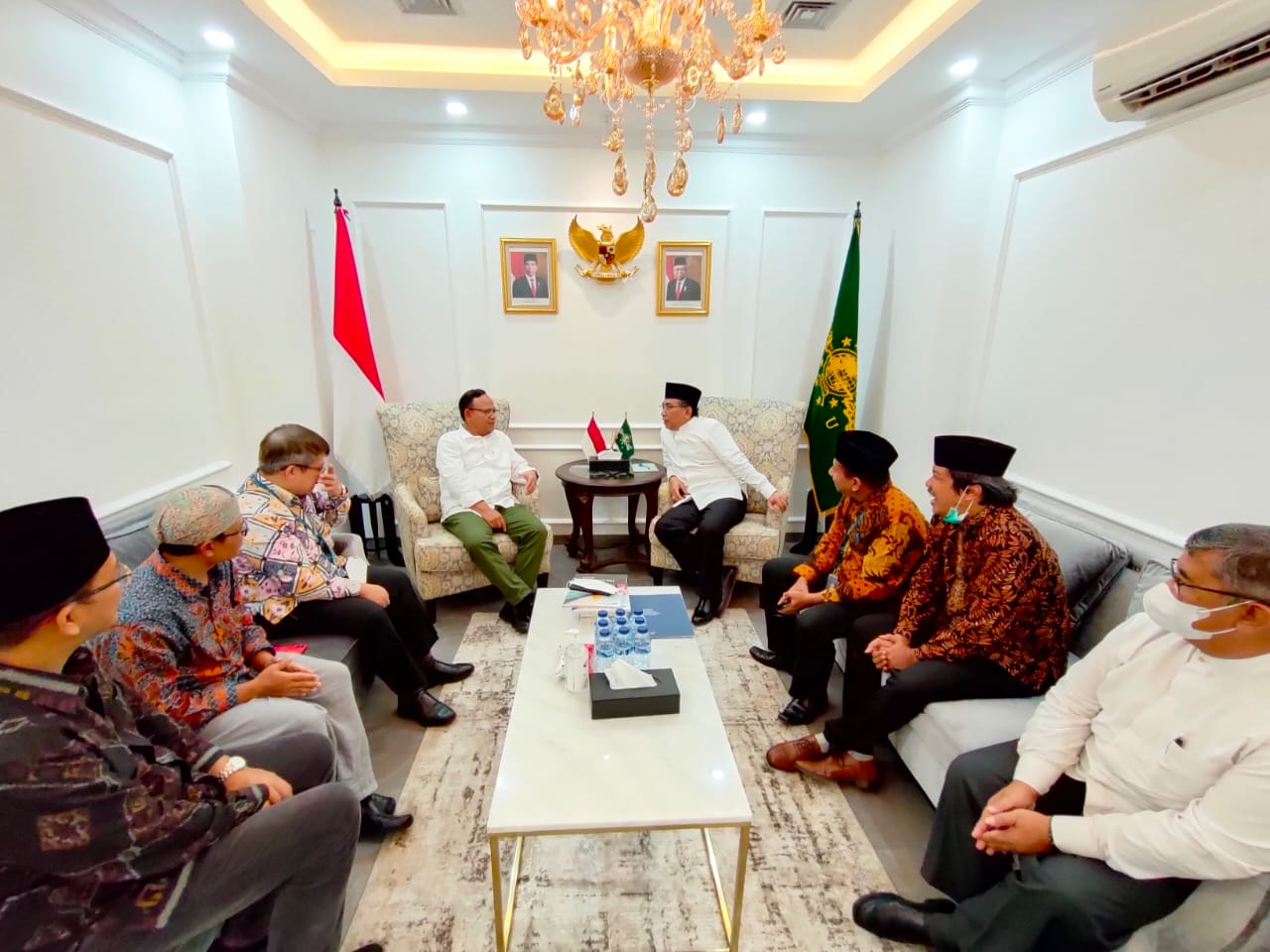 UIII.AC.ID: On Friday, June 3rd, 2022, the Rector of UIII and his delegate visited PBNU, the main headquarter of the largest Islamic mass organization Nahdlatul Ulama (NU) in Central Jakarta, and met KH Yahya Cholil Staquf, also known as Gus Yahya, to explore possibilities of cooperation and collaboration between the two institutions. In recent months, UIII has been actively pursuing partnerships in various fields, both at the national and international levels.

In his remarks, the Rector of UIII Komaruddin Hidayat said that the purpose and objective of his visit to the PBNU Office was to share his views in an effort to develop Indonesian Islam on the global stage. He hopes that Indonesian Islam can participate in the advancement of global civilization. "We at UIII feel that we have so many similarities with Nahdlatul Ulama so that in the future we can work together on many different fields," explained Komaruddin.

He admitted that, as a new campus, UIII is certainly not comparable to NU as an established, old, and large mass organization. But of course, there are things that can be collaborated," said the UIII Rector. Jamhari Makruf, the Vice-Rector for cooperation, research, and inter-institutional affairs, emphasized that UIII is ready to cooperate with Nahdlatul Ulama, especially in increasing the educational capacity of students and Muslim scholars in Islamic boarding schools. Moreover, what Nahdlatul Ulama has dreamed of since long ago in developing an open, friendly, and scientific-minded face of Islam in Indonesia is also one of the important visions and missions of UIII as an international Islamic university in the future. Responding to this, Gus Yahya, the Chairman of Nahdlatul Ulama, said that the establishment of the UIII campus is an initiative that should be supported and appreciated.

He assessed that UIII is trying to develop a discourse of Islamic thought in the global arena. "It is this aspect of internationalization of Indonesian Islam that has the potential to become an area of cooperation between PBNU and UIII," he explained. The UIII delegation was warmly received by KH Yahya Cholil Staquf along with KH Abd. Moqsith Ghozali, the Katib Syuriah of PBNU in their majestic office room dominated by white colors, is located on the third floor of the PBNU building. Regarding this collaboration plan, University Secretary Chaider S. Bamualim added that actually this visit was also aimed at establishing strategic collaboration between campuses and the Ulama to respond to the recent national and global socio-religious challenges.

Campuses need to learn from the Ulama (scholars) as role models and inspirations in order to generate ideas, thoughts, and attitudes of the ummah that are inclusive, competitive, and authoritative in their respective fields. In addition to this cooperation, Gus Yahya explained PBNU's plan to hold an international conference of world religious leaders. This is planned to commemorate the 100th anniversary of NU which falls in the month of Rajab, 1444 Hijrah. The international conference is called "Religion Twenty" or (R-20) and will be held in Indonesia in November 2022, adjacent to the implementation of the International G20 events in the coming months.

During this visit to PBNU, the Rector of UIII Komaruddin Hidayat was accompanied by a number of other UIII campus leaders such as Jamhari Makruf (Vice-Rector I for cooperation, research, and inter-institutional relations), Dadang Muljawan (Vice-Rector II for administration and finance), Chaider S. Bamualim (University Secretary), Amsal Bakhtiar (Director of Business Development), Syafiq Hasyim (Director of Libraries and Culture), Philips J. Vermonte (Dean of the Faculty of Social Sciences), and Dadi Darmadi from the media office. (DD)