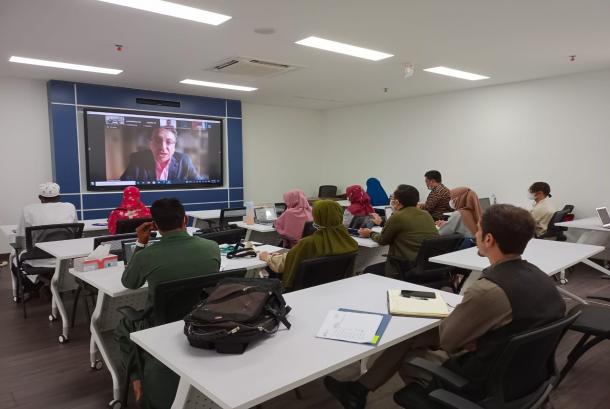 REPUBLIKA.CO.ID, DEPOK — Developing countries imitate the West to progress. One of the things adopted by their government is to accumulate capital in order to catch up and spur development.

“Western progress is inspired by the spirit of the Protestant Ethics which encourages capital accumulation. According to Max Weber, this will be the driving force for industrial development which will ultimately become the locomotive of economic growth," said Mehmet Asutay, Professor of Middle East Studies and Islamic Economics and Finance from Durham University in his inaugural lecture to the Indonesian International Islamic University (UIII) Faculty of Economics and Business (FEB) Masters Students, last week via an online connection.

Entering the second semester, UIII applies an offline face-to-face teaching process. However, for cases where the lecturer is abroad, a hybrid class is applied where students remain present in the University class and the lecturer is instructing through Zoom Meetings. Prof. Mehmet Asutay, who also serves as Director of the Durham Center for Islamic Economics and Finance, is known as one of the icons of global Islamic finance scientists.

Besides Prof. Mehmet, Professor Seif el-Din Ibrahim Tag El-Din will also contribute to teaching the UIII FEB Masters Students in the second semester. Prof. Seif is a recipient of the IDB Prize, 2015, and is well known in his capacity as a pioneer who laid the foundations of modern Islamic economic theory.

Furthermore, Prof. Mehmet said that capital accumulation may accelerate physical development, but it is not always related to human development. Many Muslim countries have high GDP per capita, but their human development index (HDI) is not commensurate with the wealth they obtain. For example, oil-producing countries on average have high per capita incomes such as Qatar (50,124 dollars per year), United Arab Emirates (36,284), and Brunei (27,443).

The same thing happened in Malaysia. This neighboring country of Indonesia, according to Prof. Mehmet, has succeeded in making Islamic finance to facilitate the entry of capital accumulation. The middle class is also growing in Malaysia. In major cities like Kuala Lumpur, they fill and are often found in important positions.

However, this did not necessarily succeed in elevating Bumiputera to become the dominant element in the Malaysian economy. "In other words, even though capital accumulation is achieved, human development, in general, has not been fully achieved," said Prof. Mehmet.

In the previous lecture opportunity, the Head of Study Program of UIII FEB, M. Luthfi Hamidi, Ph.D. conveyed the need for an approach and development of Islamic Economics because many have missed the conventional economic approach. Variables that are used as assumptions in Islamic Economics are not always tangible (visible). For example, the element of barakah.

"But from an Islamic perspective, that level of satisfaction has never been achieved in the world," said Luthfi. He mentioned, a person who has one mountain of gold still wants to get a second mountain, and so on. "So, the more important aspect is not how many eggs there are, but how many mouths taste and enjoy the martabak," he said.

In a Hadith, the Holy Prophet once said, when you cook soup, increase the broth so that you can share it with your neighbors. “This indicates something more blessed is preferable. Because in blessing, even if it is a little, many people can feel the benefits,” he said.

FEB UIII only has a Master’s Program in Economics. Currently, the number of students reaches 19 people, eight of which are students from abroad.

"All of them received scholarships and lived in the campus Student Housings located in Depok, West Java," Luthfi said.

In September 2022, FEB UIII will open a Doctoral Program in Economics. Just like for the master's degree program, in addition to domestic students, students from various countries will also be recruited and selected for this program.

"They will get scholarship facilities, dormitories, and then do research at the UIII campus," he said.

UIII, the New Spirit of Islamic Higher Education in Indonesia