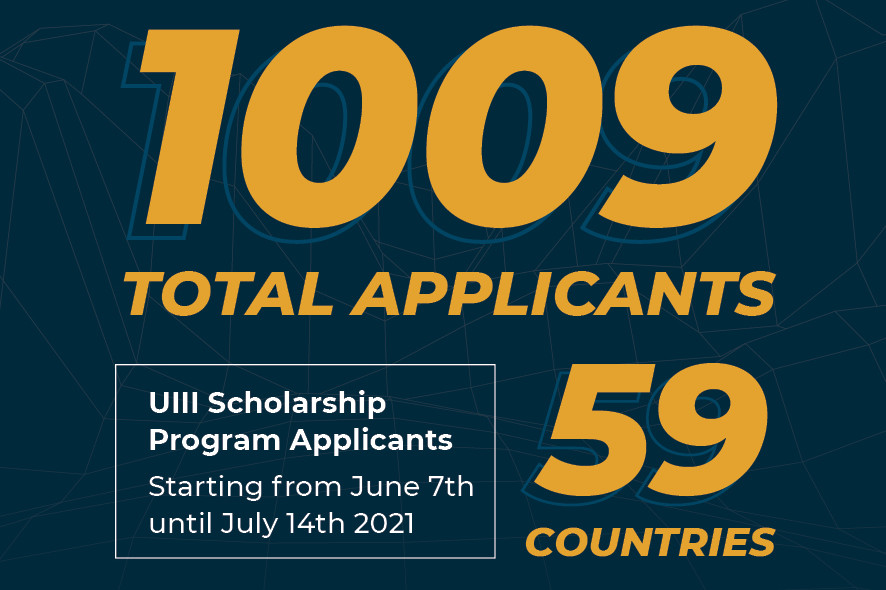 Scholarship registration for the UIII master's program was closed on Thursday, July 14, 2021, at 23.59 Jakarta Time. We announced this scholarship program for the first time on June 7, 2021, with a four-week application deadline. Then, in consideration of expanding the outreach and access, we extended the registration time again by a week.

Until the specified deadline, on we received 1009 applications for UIII scholarships from 59 countries. This is a fantastic number we didn't expect before. After all, UIII is a new campus, and like a new campus, of course, UIII is still far from being popular.

Some people still wonder what the UIII campus is, many of them may have never even heard of the name of this campus. Several building facilities and other facilities are still under construction. However, this does not seem to reduce the interest and enthusiasm of the applicants to compete in this scholarship program. We thank God Almighty who always accompanies our steps in an effort to provide one of the best educational facilities for potential young people from various parts of the world.

We share responsibility for the birth of great scholars and future leaders who will build a better world, and of course we also have to thank you, the applicants, for the high interest and enthusiasm for the Master’s programs in UIII scholarship we launched. The trust you have given is very encouraging for us, and this encourages us to work earnestly and objectively in guarding that trust.

As we wrote in a previous editorial, Why Scholarships Matter, the label of Islam at UIII is not meant to build exclusivism. Instead, we want to disseminate an inclusive kind of Islam. In the Qur’anic holy book, it is referred to as “rahmatan lil alamin.” That is, the virtue of religion should also be a kindness that can be felt by all human beings without being limited by the walls of religion, ethnicity, race, culture, language, and others.

With such claims, and with the trust of all parties, applicants for UIII scholarships come from various religious, national, racial, and gender backgrounds. One of the data that surprised us is that the majority of applicants actually came from abroad, namely the international applicants from countries we mentioned above.

The percentage is 54.3%. The rest are applicants from Indonesia, 45.7%. On one hand, this shows the trust of the internationally educated public in educational institutions in Indonesia. On the other hand, this data also strengthens UIII's predicate as an international campus. The two things above are good indicators for a new campus, and also a challenge for us to be better and more trustworthy.

We are not giving a guarantee, but we will not write the challenge on a blank paper. In terms of human resources (HR) we can claim a fairly high confidence because UIII lecturers are PhDs from well-known universities in the United States, Europe, Australia, and the Middle East. In terms of the construction of the UIII campus, it is a National Strategic Project which is directly under the auspice of the President of the Republic of Indonesia.

Another interesting data is the applicant's participation rate in terms of gender. The scholarship applicants are dominated by men at around 73%, while women are approximately 26%, and the rest (blank) is 1%. How to interpret this data? Let us take a comparison of cases in Indonesia. Since the last two decades, every public institution in Indonesia has to consider women's representation by providing a quota of 30% (for women).

The aim is to address gender inequality and enhance the role of women in the public sector. In practice, this quota is rarely achieved. Therefore, the emergence of the figure of 26% of female applicants for the UIII scholarship program is truly encouraging. This figure does not reach the 30% quota limit, but it is also not far away. In other words, the UIII scholarship program has helped encourage women's participation in human resource development.

Hopefully in the future, in the various programs that we offer, the level of women's involvement and participation will be even higher. We would like to say again that UIII is the first campus in Indonesia to open academic programs for MA and PhD programs (in the future) with full scholarships, inviting international students. The aim is to foster and strengthen friendships with recipient countries, as well as to fulfill our obligation to actively participate in supporting the sustainability of the higher education of the younger generation globally.

UIII also adheres to the principles of non-discrimination and non-sectarianism, which applies to all regional categories, ethnicity, religion, and gender, and encourages groups with disabilities to take part in the scholarship program. As we know that discrimination is still a problem in the modern world that triggers the birth of poverty, backwardness, and dependence. Therefore, the figures we describe above are not meant to reduce this problem. Because human beings and their great values are not just numbers. They are great values in themselves.

Figures are only temporary maps, only a tool to see the phenomena that are happening. The rest is a real struggle in the real world to eliminate discrimination in its various form in this world. Education is one of these means that can be used to achieve this goal. Finally, we congratulate all of you who have applied for the UIII scholarship program. Furthermore, the selection team will work as fairly and objectively as possible so that your efforts and struggles are not in vain. Wish you all the best. (ag)